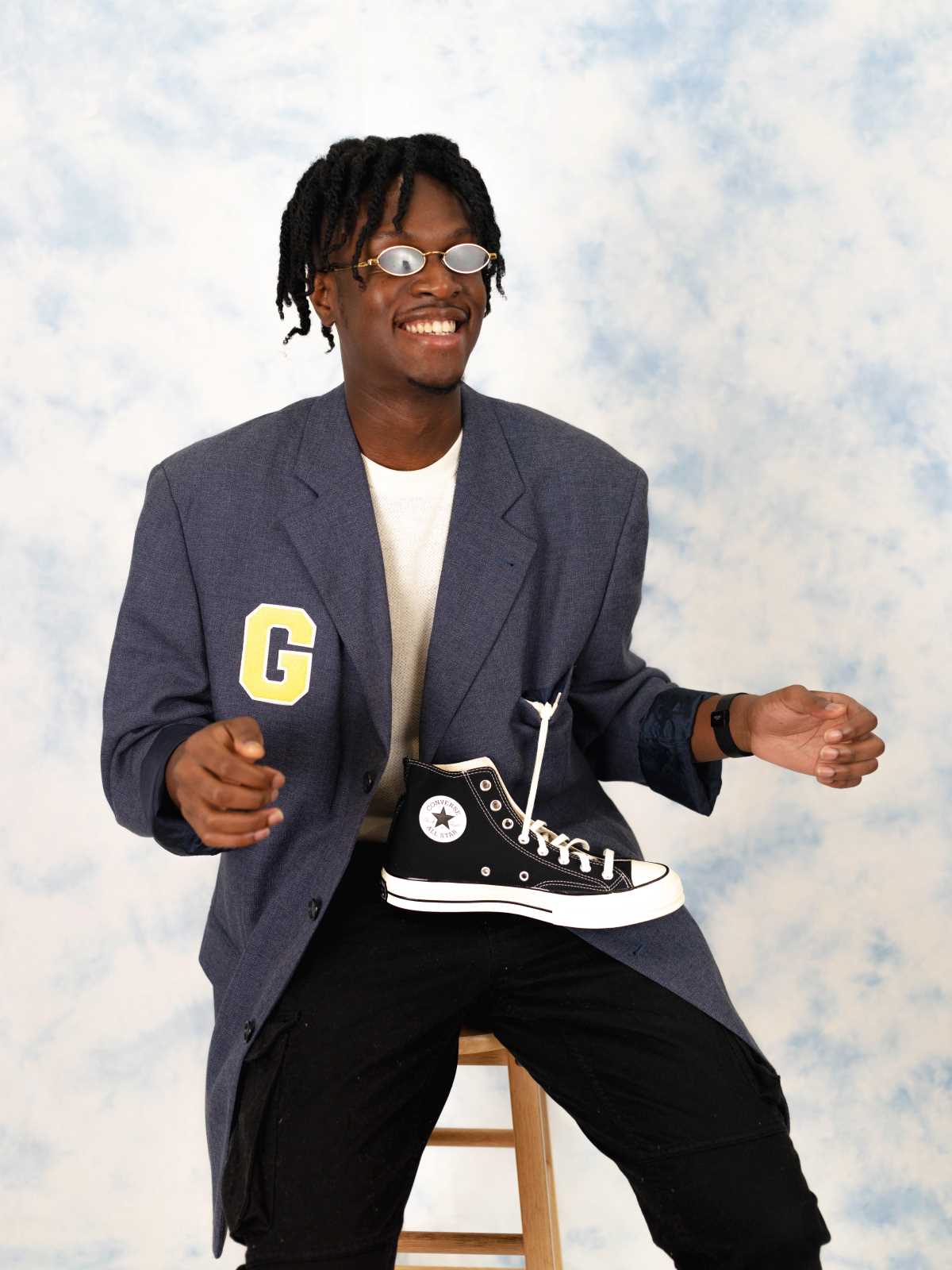 An increasingly vital voice in the UK’s creative industries, Josh Akapo leapt into the entrepreneurial driving seat at age 17 and has since moulded what was once a friend-founded streetwear enterprise into a burgeoning creative agency.

‍archtype (like hundo, they're lowercase) focuses on merch, digital and design and has secured clients as instantly recognisable as Lovebox, University of London, and even Stormzy! He has been widely recognised for his work and has been listed as one of BIMA’s 100 as well as the 30 under 30 GUAP x Converse’s ‘Blacklist’. If that wasn’t impressive enough Josh has also recently finished up his studies and can also be seen heading up research over at Hype Collective. How does he have the time? We caught up with Josh to find out about his journey so far, his upcoming projects, and why you won’t ever catch him without a pair of headphones!

Tell us a bit about what you're currently working on.
I run a creative agency called archtype. We move at the pace of culture, merging design, digital, and more. We launched as an agency in 2020, but we've been going since 2015. We began as a clothing company before doing merch design, and running socials for other people. We loved what we were doing, which is essential. We collaborated with DLT who are a really cool Black events company, in the UK. We worked on some projects before we realised that we could offer this service out to other brands and artists. Now we're becoming not only an agency that creates impactful moments in culture for brands and artists, but also for movements, and charities.

How old were you when you started archtype?
We were playing basketball when we were 16/17 and tried to come up with ways of making money. We decided if we got 100 t-shirts, put a cool design on them and sold them, we could make some cash! We put our skills together and in January 2016 we launched the ARCHSAMURAI t-shirt, which was designed by one of my co-founders, Jaydon. It was great, and we had a decent amount of success.

Our collaboration with Lovebox came later that year. I was just scrolling on Twitter when I stumbled upon a flyer looking for young people aged 16-24 in Tower Hamlets to do a festival merchandise campaign for the festival. We lived in Kent at the time but we managed to blag our way in by saying we were from Tower Hamlets. It worked! We were very young and very ballsy.

Later on, we experienced hardships in terms of discrimination, because of our race, class, and age. There are different systemic forces at play that mean our career trajectory might be slower than others.

You’ve mentioned quite a lot of different skills, such as socials and marketing and design. Do you have specialist areas?
To be honest, I've stopped being a jack of all trades. I would now describe myself as a strategist and a researcher.

Two or three years ago, I didn’t know where I fitted in the creative industry. Even though you have set up your own company, you still need to have worked for a company before people take you seriously. My work with Hype Collective has changed so much based on my skills. I started out doing a mentoring program, and now I'm doing research and helping out with a bunch of other purposeful projects.

What was it like collaborating on projects with the likes of JP Morgan?
‍We did an event called Black in Tech, with Hype Collective last year as part of the Broadcast Series. We went to Black content creators, Black professionals, Black people with really interesting careers, and got them involved. We were focusing on Black talent and decided to do a series of events to help Black students and grads who want to get into tech. For those events, we partnered with Microsoft, JP Morgan and PwC. We had amazing sessions, with hundreds of students turning up. And then we realised that it’s not only tech that needs this! I'm excited for season two.

We’ve seen that you’ve won some awards. How has this positively impacted your career?
I think the first one was BIMA 100, I didn't even know what BIMA was when I was entering this industry, that was above me at that time. When I found out, I thought: ‘me on this list… that’s crazy.’

With 30 under 30, my friend put me forward for that. It was written in a Black-owned magazine that I've been following since I started in this industry, so that was a huge deal. Awards do boost your profile, suddenly people are asking you to do random things.

I'm also judging the D&AD New Blood awards. I was going to enter myself for the very category that I’m judging. These achievements are lovely additions to my creative journey, but they're not the bread and butter. It’s events like the Broadcast Series that create proper change within the industry.

What kind of brands or people do you think get their marketing consistently right?
One is a friend’s clothing company called JEHU-CAL - he's good at his marketing. They’re growing year on year and he knows his audience and cultural following, as well as how to remain ethical as well. When we think about good campaigns we think Nike - ‘Nothing Beats a Londoner’, we think the Sainsbury's Christmas Ad etc. We think of those campaigns, but we don't look at the grassroots. That’s where we pull culture from, as much as we would like to not admit it.

How do you look after your mental health and wellbeing?
Being creative is seen as an innately positive thing, but it just doesn’t always feel that way. It’s almost like we haven’t realised that we are mourning as a nation. We haven’t just lost people, but we have also lost opportunities, experiences and a year out of our life.

COVID has also highlighted so many things such as the number of Black lives that have been lost at the hands of white supremacists.

It’s so important to prioritise your mental health. I’ve started journaling, so that’s one thing that’s helped. I’ve also split my work life with my personal life, almost completely in the sense that I now have a work phone and a personal phone.

What things keep you inspired?
Music inspires me a lot! Even now I have my music playing on my laptop. Music is one of the most creative things that feels tangible. I've been a musician since I was 6 years old. I grew up learning to play instruments; it's always been a part of my life.

Nova Arkney: ‘I was always aware of the lack of diversity in sales teams’

Oliver Matejka: ‘Good marketing is about making a connection with your audience’