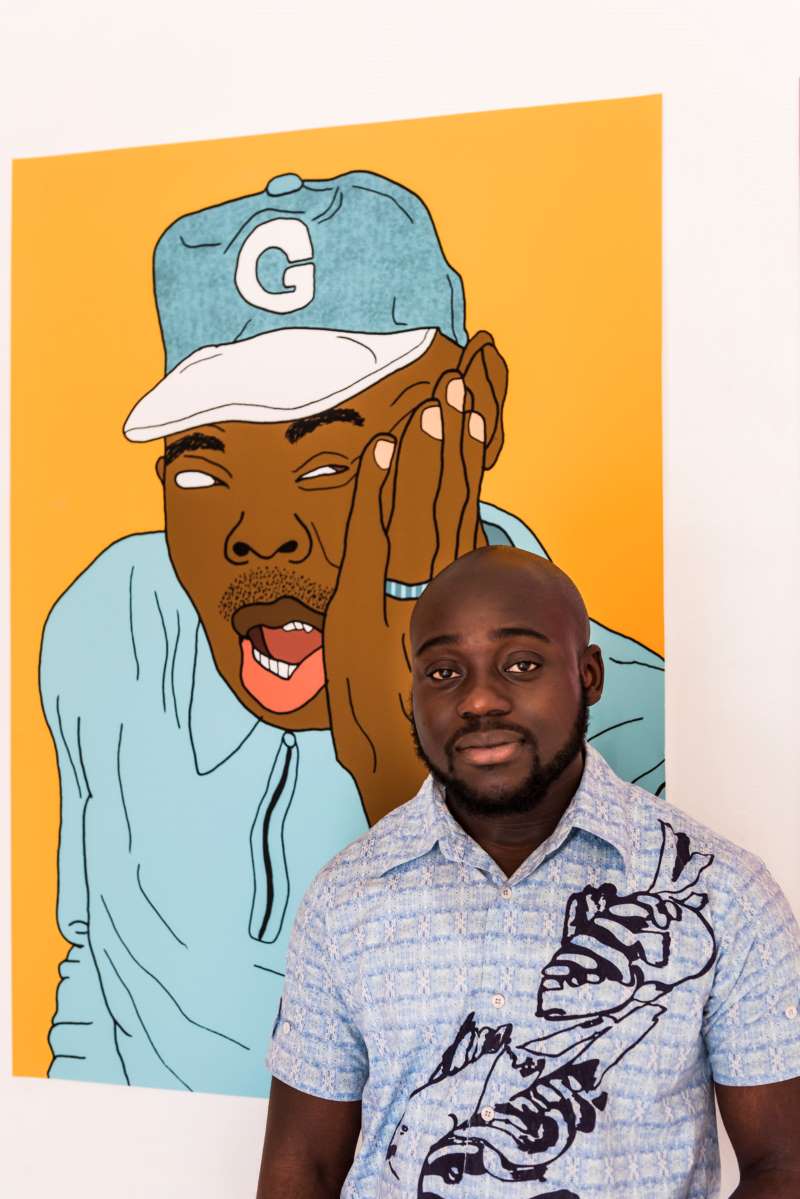 Gen Z talent is thriving. Whether it’s illustrators, image-makers, designers or artists, find out what our favourite young creators have to say about their passions and practice!

‍Denzel Kessie, aka BLLACK LINE, is a north west London-based illustrator and graphic designer whose distinctive style has captured the attention of clients such as Nike, Fila and the NHS. His bold illustrations are instantly recognisable and much of his work centres around popular Black culture and music. We caught up with Denzel to discuss his upcoming projects, side hustles and what it’s like to be a part of the Converse All-Star Program.

When did you become interested in illustration and graphic design? Was it always something that you thought you would pursue professionally?
I was initially interested in drawing, but during my time in college, I wanted to challenge myself creatively and took the BTEC level 3 Graphic Design course. It wasn’t until the first year of my graphic & illustration course at university that I developed a genuine interest in both fields.

For young people operating within creative industries, it’s become normalised to have multiple side hustles to cultivate a creative career. Do you agree with this, and how do you manage your time?
I'm afraid I have to disagree with this. While I have no problem with a creative having multiple side hustles, I am against it being essential. Creatives needing to have different side hustles often leave them less time to focus on the creative work they enjoy most. It also tends to result in multiple things being done on a mediocre level, as opposed to doing one or two disciplines at a higher level.

Do you think that young creatives are being held back? If so, how can employers better support young creatives?
Young creatives are absolutely being held back. Employers can fix this by offering junior roles that have actual junior requirements, as opposed to handing out junior positions with the expectation that the applicant will have 2-3 years of experience, along with skills in various disciplines (like expecting junior designers to have skills in HTML or animation).‍

What would you say are the main perks of working as an illustrator and graphic designer? Equally, are there any downfalls?
‍Some perks include having the choice between working at a company or being freelance, doing work that can be used for various industries and being creative for a living. A considerable downside would be that many people don't respect the work we do, including clients. It is especially dreadful when you’re a freelancer, as you will often have to justify your rates or even the right to get paid at all.

You’ve secured some big clients such as Nike and the NHS. How did this come about?
Through networking and building relationships. Many creatives starting out don’t know this, but the work you get is heavily dependent on your network. Even if you’re talented, without the right network, no one will be able to find you. And on the off chance they do, you have no one to vouch for you.

‍What’s your process for creating an illustration from the idea through to the finish?
Once I get the idea right, I’ll look for the appropriate photo references. Once they are found, I’ll sketch out my idea on my iPad, and once I’m comfortable with the sketch, I’ll start with the black line-work and finish it off by adding the colour and any small details, if necessary.

What tools do you use to create your illustrations?
I use Procreate and occasionally Photoshop.‍

Have you got any upcoming work that you’re excited about? Tell us more!
I’m currently working on a new personal project called 70 Days – The Sequel. It’s a continuation of my end of year university project called 70 Days where I spent 70 days (the entire length of the project) creating illustrations that showed appreciation for all things that are popular in mainstream Black culture. This included drawings of musicians and clothing.‍

What would be a career highlight for you so far?
I did my first £1,000 commission this year. I can’t say what it was about or who it was for, but they paid me £1,800 for my services. This let me know for the first time that I was truly capable of living off creative work.‍

‍You’ve recently become a part of the Converse All-Stars team. How has the accolade helped you in your creative journey?
It’s helped get me more work, but it hasn’t helped with much else. However, it’s early days, and there'll be a chance for me to get more out of it in the future!

‍If you could give your 18-year-old self one bit of career advice, what would it be?
Do not do any rush jobs unless the client agrees to pay a rush fee. There were too many times where I did all-nighters for jobs that weren’t worth it for the money I was getting.‍

Your work often centres around music - is this a big inspiration for you?
A massive inspiration. Many of my ideas come from song lyrics, music videos or album covers I’ve seen in the past. When it comes to creative content, music is my number one, right next to anime and manga.

Check out more of BLLACK LINE'S work on his website.

Nova Arkney: ‘I was always aware of the lack of diversity in sales teams’